Behind the Red Shoe Movement’s #WingsOfCourage initiative is a partnership with renowned artist Colette Miller, a visual artist with multiple talents. Find out who she is and the amazing world she created!

Ten years ago Colette began The Global Angel Wings Project – those impressive colorful wings you have probably spotted all over Instagram and other social media, or around your town. Through her murals, Colette hopes to remind humanity that “we are the angels of this Earth.” A message with which she has already traveled far and wide and which she continues to share through new installations around the world. 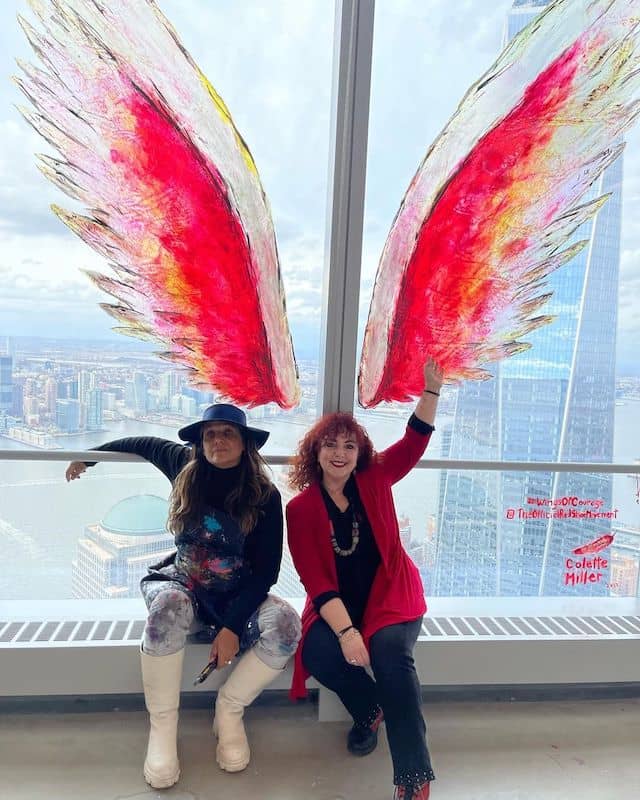 This year, for the Red Shoe Movement’s 10th anniversary we partnered with Colette to create the #WingsOfCourage initiative. We unveiled our first set of wings at Spotify’s offices for Women’s History Month. The installation showcases Colette’s trademark wings specifically designed in the Red Shoe Movement palette. They fly on the 72nd floor of an iconic skyscraper on 4 World Trade Center in New York City, facing the Freedom Tower. They welcome a hybrid workforce back to their workplace with a vibrant message of hope.

ALINE CERDAN VERASTEGUI – You are best known for the Global Angel Wings Project. Can you tell us a little about what inspired this viral collection of colorful angel wings? How did it become a global project?

COLETTE MILLER – I would describe it as a type of vision. I was in Los Angeles, City of Angels, around the beginning of 2012 or the end of 2011. I had been meditating a lot about humanity, our collective experience and the “divine” in all of us – our higher natures. Wings came into my mind as I drove. Big angelic type wings.  I would imagine them on the walls of the buildings. I decided to act on the idea and make them human sized for people to wear them. To remind humanity that We Are the Angels of this Earth. I didn’t expect anything, I was surprised when people suddenly started to take photos. I was just giving something to the world pro bono on the street that I thought would be good for people to see.  A glimmer of hope. A reminder of our Higher Nature.

ACV – You collaborated with Red Shoe Movement to create their #WingsOfCourage initiative, can you tell us about it? How is this initiative different from what you usually do?

CM – It’s special because it’s on the top floor of 4 World Trade Center, overlooking the Freedom Tower in one of the most enigmatic cities in the world –and one of my favorites. The red palette matches the Red Shoe Movement’s colors. Mariela Dabbah and Gustavo Carvajal contacted me and secured the location. We are using their tag #WingsOfCourage, to promote just that: Giving women’s dreams flight through courage. I don’t normally hashtag directly on murals, but I had to embrace this specific cause for Red Shoe Movement and their initiative. 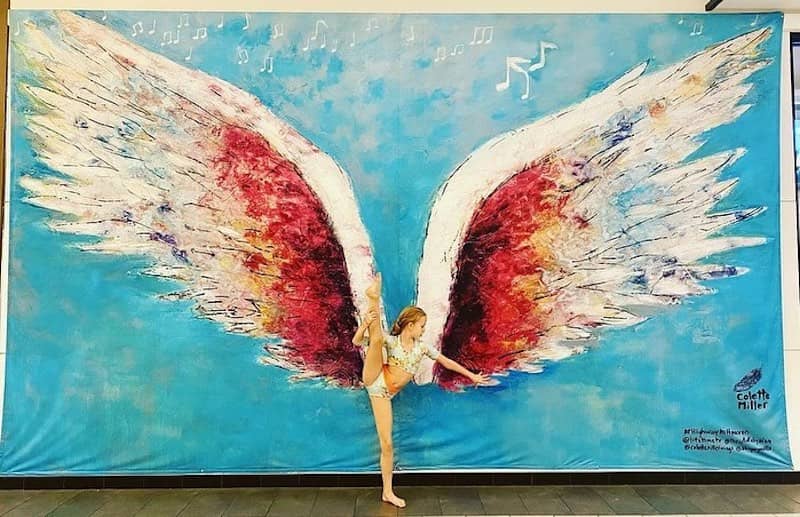 Women of Courage and Other Angels

ACV – Who are some of the Women of Courage who have inspired you along the way?

ACV– Tell us about your journey as an artist and what it has been like to experiment with different mediums, such as music, poetry, and street art. What struggles have you encountered as a woman in these environments?

CM – When you collaborate in projects like a band, you learn to deal with different personalities, some of which are more complex than others. Sometimes, you feel like you need a degree in psychotherapy. As for more independent forms of creativity, such as painting, one must have the courage to listen to our own voice. Sometimes it takes a lifetime, if ever. If I really sit with myself quietly, I may get to the divine comedy of humanity and hopefully the kind part of humankind. But we are all complex stories with a past and none of us is perfect. We all have baggage, me included.

ACV – What is it about street art that you love? Do you think it conveys something that can’t be conveyed in other mediums?

CM – Street art is available and immediate to the public. It’s often self-authorized by the inspired artist and their urgency to put it out there. I’m curious about the intent behind it, but I also wonder and am concerned about desecration and disregard for public property. Street art can also easily be ruined because of its vulnerability on the street, but that impermanence itself might be part of its great value. The ephemeral. The temporary. I want my murals to last as long as possible, especially those that have been commissioned. I take great care with varnishes and other protective measures. I’ve done a lot of research over the years. 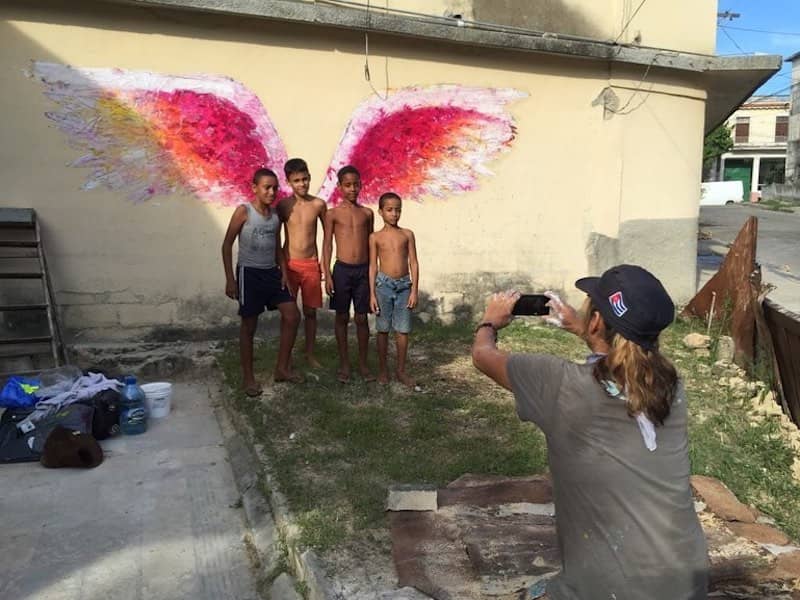 Empowering People Around the World

ACV – You have taken the Global Angel Wings Project around the world, are there any locations that hold a special place in your heart?

CM – Well, that’s a difficult question because each location I have painted the wings has been a unique experience. I remember doing a pair at an orphanage outside Jiaxing, in China, and the children embraced me without prejudice or second thought. It was chilly inside and some of the children had disabilities, but their innocence and welcoming nature was a beautiful thing. It was an amazing day. Outside Nairobi, in Kenya, in an old courtyard where some kids camped out on the ground. They started a boxing sports club named after the wings, the Koyalre Wings Miller Boxing Club. There’s one in Juarez, in Mexico, motivated by the drug cartel violence the city faces. I installed it in 2015 to inspire some healing through a group called Juarez es Resiliente. I slept with my scissors under my pillow while I was there because I was a bit tense.

ACV – How has seeing the project grow and evolve into other endeavors like #WingsOfCourage changed you or the way you see your own project?

CM – I appreciate the right collaboration with people and projects I align with. I immediately felt that way with Mariela when I met her, she was a natural friend. Global Angel Wings Project has an uplifting universal appeal and so does #WingsOfCourage initiative and the Red Shoe Movement, which is empowering women and anyone else who chooses to embrace gender equity worldwide. 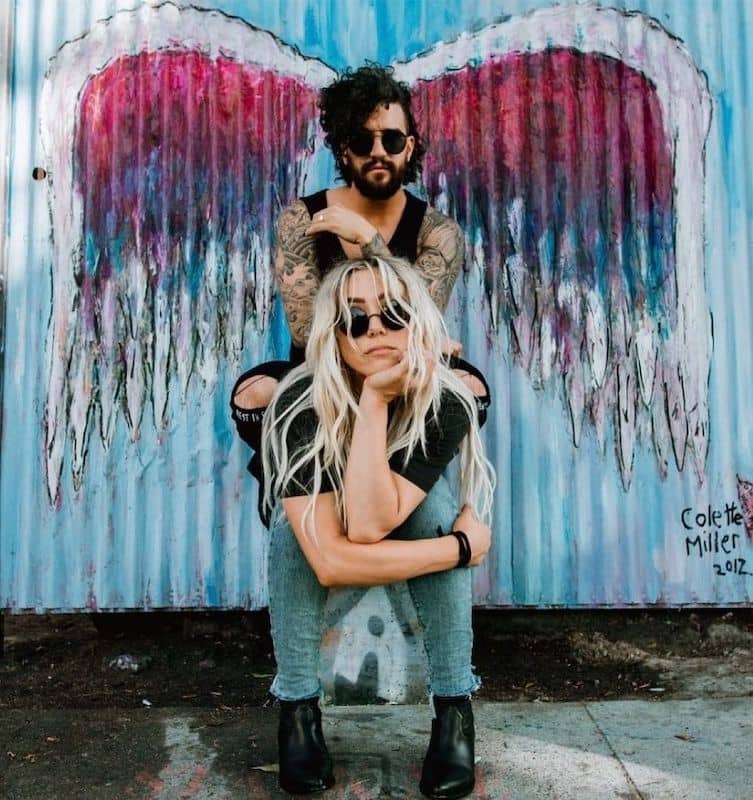 ACV – What do you think it is about your work that resonates with so many regardless of geography? Have people reached out to you with special stories involving the Global Angel Wings Project?

CM – I think it touches on the Universal.  It’s simple, but striking and strong. That’s what my father says about ideas: Simple, striking, strong.  The way I paint wings too, they are big and free. From the heart.

I have had people who have lost someone, often tragically, contact me with their photos and it catches my breath because these people are going through such grief. And suddenly I’m connected with them through the art and a moment in time with their loved one. It’s humbling, and I can understand sudden grief myself, so I can empathize. Others have reached out to tell me about the lift they felt when they found them in a remote area or even a high-profile area like the Burj Khalifa, the tallest building in the world (for now).  I’m often amazed at the creativity of the photos, like the NYC ballerinas under a bridge in East Harlem with the wings. I put those wings up (which the city now helps protect) in the early days, during the winter. The paint froze as I was installing them, as did my fingers. But I have seen some beautiful photos and have felt like bowing my head in gratitude. 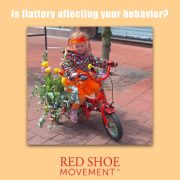 Is flattery interfering with your career goals? This story is a wake up call! 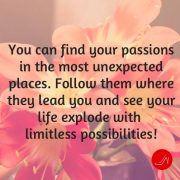 I find my passion in the most unexpected places 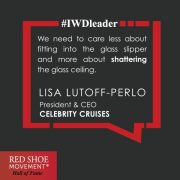 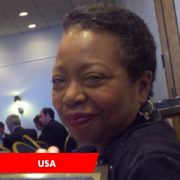 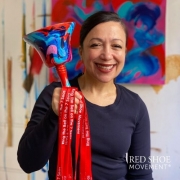 How Latina Speakers Are Born – The Mariela Dabbah story
0 replies 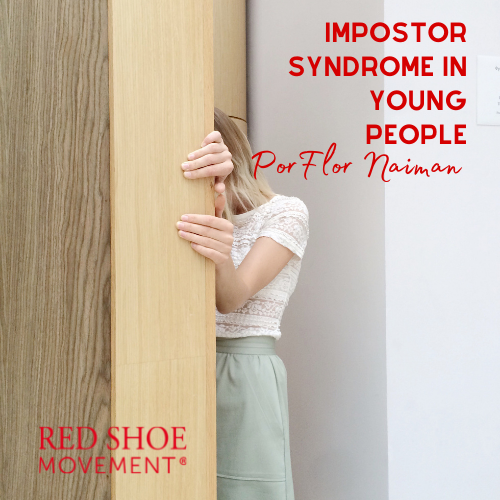 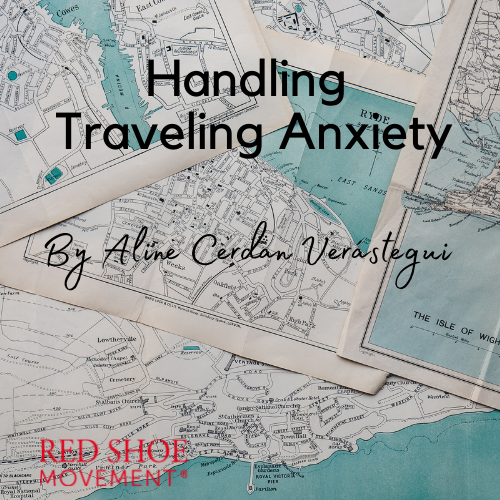