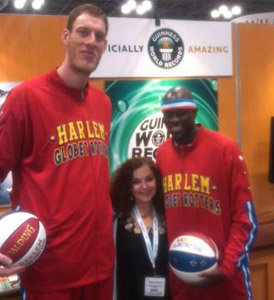 Yesterday I met “Paul “Tiny” Sturgess, the 22 year old who at 7’8” is the tallest member of the Harlem Globetrotters ever, and my worldview has forever changed. And not only because at 5’1” I tried to put myself in his shoes and imagine what the world looks like from above, but because I couldn’t stop thinking about using your height as the only lens through which you experience life.

He was at Book Expo America at the Guinness Book of World Records booth (which recognized him in November 2011 as the Tallest Professional Basketball Player in the World) posing for pictures with people like me who were in awe of him. He was almost as tall as the booth divider curtains!

I walked away from this 325-pound man who towered over all of us thinking how natural it would be for someone with such a prominent physical trait to let it define his life, to spend all his time just traveling the world posing for pictures at any number of fairs, exhibits, conferences, and getting paid for it.

Yet Paul, who loves sports and has played golf and soccer in the past, has focused his career on basketball, which led him to his current gig with the Harlem Globetrotters far away from his home in England. Yes, he has chosen an occupation where he can leverage his height, but he is not only about his height.

In contrast with Sturgess’ attitude, I often notice how many Latinos make their entire life about their Latinoness. They allow their ethnicity to completely define who they are as if  identity were such a simple thing.

They live in Hispanic areas, have Hispanic friends, and many don’t feel the need to learn English. They join only Hispanic organizations and at the smallest suggestion to adjust a trait to improve their career opportunities they get all defensive.

These are some of the same people who, during some of my presentations, ask questions such as, “How can I keep my Latino culture and adapt to the company culture?” Or “ How can I work at this company without having to leave who I am at the door?”

Well, this young basketball player may hold the answer. It’s much harder for him to leave his height at the door. But, you see, he doesn’t just bring his almost 8’ frame to work and simply relies on that one trait to define who he is and what he does. He trains and practices hard (and likely harder than anyone else) because he knows that, for better or for worse, all eyes will be on him. If he does a great job, the NBA will try to recruit him (as they apparently already have), and if he does a poor job, well, you know how quickly everyone will notice that too. So Paul leverages his height at every occasion but he mixes it with other traits of his, such as being a hard-working athlete and a good team player.

As a person with a Latino background, you also have unique traits that, combined with your personality and preparation, can be used to your advantage. But if you’re holding on to your Latinoness as your only defining trait to the detriment of everything else, your world will probably turn out to be much smaller and less rich than it could be. Kind of like Paul just traveling around the world posing for pictures.

We forget that diversity is not just a concept we can use in the context of getting  others to include more minorities in their workplaces, conferences, TV programs, and so on.  It is also a concept that applies to us recognizing our own personal diversity. We forget that we are not only Latinos, that our ethnicity is only one aspect of our identity and that we must learn how to leverage it without allowing it to dull the constellation of traits that make us who we are.