No matter where you work, chances are you are surrounded by examples of cultural differences. These differences may be due to ethnic and racial background, age, geography, religion, and even the kind of school people attended. (We discussed what is cultural diversity in this blog.)

What’s fascinating is that classic examples of cultural differences are often misinterpreted as mere personality traits. People pick sides, “I’m right, they are wrong,” and nothing constructive comes out of the argument. Knowing how to identify cultural differences in the workplace can give you a competitive edge while putting you in a position to enjoy your colleagues a whole lot more!

There are many subtle cultural differences in the workplace that are not as obvious as how we introduce each other. Knowing about them can improve the work environment.

Examples of cultural differences in the workplace

Giving suggestions or keeping to yourself

It wasn’t the first time that Marta’s manager asked her to copy-edit the store flyer. Their company served a large Latino population and Marta was happy that more Latino items were being offered at local supermarkets. As she worked on the flyer featuring the new products, Marta noticed that the items were not being promoted in a way that would appeal to Latinos. She thought of approaching her manager with her observations but she felt that the boss would take them as criticism of the advertising team who had created the copy. So she kept her mouth shut.

Later, when Marta mentioned her decision to Jim, an Anglo colleague, he said Marta’s boss would probably welcome the suggestions. Jim is right. A good manager is usually happy to hear suggestions for improving products or services, something that, for many Latinos and people from other backgrounds, may come across as questioning authority. This is just one of many examples of cultural differences in the workplace. Think about it this way: you are being paid to think outside the box, to come up with unique ideas and points of view that can give your company a competitive advantage.

What utensils we use to eat, what we eat, whether we share our food or not, are all examples of cultural differences.

Many of the examples of cultural differences have to do with how much people share about themselves and their families with their co-workers. How much is too much? It really depends on who you ask.

Latinos tend not only to share a lot about themselves but also to ask about other people’s families. They can often surprise a colleague with a question like, “How’s your aunt Margie doing?” when the colleague no longer remembers that her aunt had an operation a month ago. They ask because they care and they expect others to care about them as well. So when nobody asks Latinos about their sick child or their cousin who got married, they tend to feel isolated and disengaged. If you use these cultural differences at work as an opportunity to learn from each other, you can make it a much better (and humanized) workplace.

Waiting to be recognized

Another one of the most common examples of cultural differences in the workplace is how well (and how much) someone promotes their contributions. Humility is a basic value for many cultures (Hispanic culture included), which means that self-promotion is not particularly appreciated, encouraged or even taught at home. 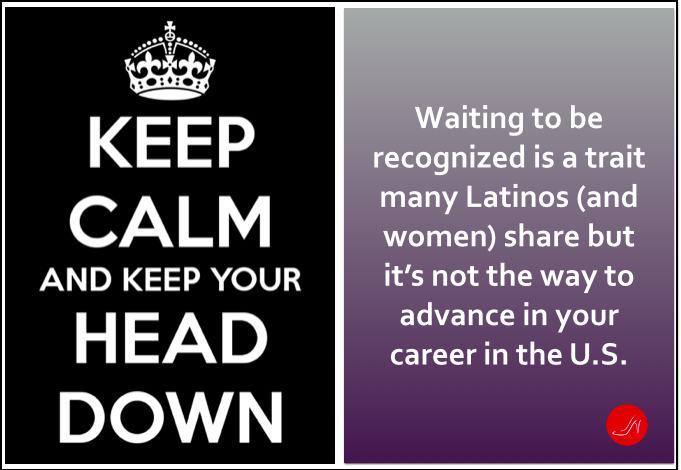 An example of cultural difference: Waiting to be recognized rather than boasting about your accomplishments.

Latinos, for instance, are usually taught to work hard and keep their heads down. They are taught that they will be recognized by their hard work. But the reality in workplaces across America is that people who fail to speak about their accomplishments are often passed over for promotion. The principle being that in order for someone to think of you when there’s an opportunity, they need to know what you’re good at and what you could do for the project they have in mind.

So the key in this case is to learn to balance your need to remain humble with cultural differences in the workplace that demand that you talk about your achievements if you want to move forward in your career.

These cultural differences in the workplace are the reason why managing a culturally diverse workforce is a challenge. But they are also the fibers that make the fabric of our workplaces stronger. Learn to identify them and value them, and you’ll be several steps ahead of the pack.

What other examples of cultural difference in the workplace come to mind?