Executive presence has become a topic of interest for women everywhere, judging from the geographical diversity of participants in our recent quiz Do You Have Executive Presence? We received entries to our executive presence survey from all over the U.S. and around the world from El Salvador, Lithuania, India, Panama, Kenya, China, Australia, France, Brazil and Spain.

The majority, a whooping 90 percent, of those who took the informal executive presence survey were checking out how much executive presence they projected and not whether they had any or not. But even within this group of women with strong leadership qualities, there are several aspects worth examining further.

Although the vast majority, a 63 percent, of the participants use a clear and concise style when communicating their ideas to others,   30 percent goes deeper into the information and the level of details they provide.  Although women tend to do better with less direct styles, and there are some professions where more level of detail is needed, there is a fine line between being less direct and not being clear, which leaders learn to master. Crafting more concise and effective messages is an area where self- awareness and practice are needed.

Confirming why it’s critical for today’s businesses to promote more women to the top leadership ranks, participants were split between two great characteristics shared by those with strong executive presence.

In a conversation with others:

Participants were split between two great characteristics shared by those with strong executive presence.

One of the areas where responses differed the most was in the way participants handled mistakes. Although the answers were evenly split between on how they dealt with mistakes, there was a significant difference in answers when we correlated how women who ranked at the top of the executive presence scale and those at the lower end deal with the situation.

The entire universe of the respondents who received the highest executive presence scores tended to reply that when they make a mistake they admit it and move on. In stark contrast, almost 90 percent of the women who scored the lowest in executive presence stated that they would figure out a way to turn the mistake into an opportunity. Admitting your mistakes denotes strength of character and moral integrity. A valuable insight for HR professionals to share with high-potentials: The first order of business is always to learn to admit your mistake. There is nothing wrong with learning from your mistakes, a different concept from turning them into an opportunity.

It’s widely accepted that women are masters at overcoming adversity and the responses to the quiz confirm that. When things don’t go the way they plan, participants were evenly split between “consulting with others on how to go about it” (50 percent,) and “finding a different way and keep going” (48 percent). Both responses prove once again that women are creative problem solvers and consensus builders.

It’s interesting, however, that a 72 percent of those who had the most executive presence tend to find a different way and keep going whereas all of those who did not have executive presence chose to consult with others to figure out a way to move forward. We might conclude that, despite these two options being used by women with strong executive presence, those who are more secure in their positions or find themselves in entrepreneurial roles try to figure things out on their own before they ask for input. Rather than immediately asking for help, these leaders give themselves a chance to come up with a good solution.

In many conversations about executive presence, people spend an inordinate amount of time discussing dress code.

In many conversations about executive presence, people spend an inordinate amount of time discussing dress code. Yes, how you dress projects confidence or lack of it, trustworthiness, attention to detail, and many other things about you; but it’s by no means the only variable to consider.

Seventy six percent of the women in the survey admitted they have a particular style that works for them. Fifteen percent stated that they try to imitate the dress style of those in higher positions. And nine percent that they look pretty much like their colleagues. After correlating the figures, we discovered that 86 percent of those with executive presence had a style that worked for them. For those who did not have executive presence, the responses were split between looking pretty much like most of their colleagues and having a style that worked for them. 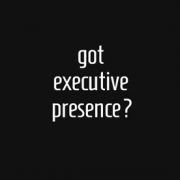 Executive Presence: The Stigma that Women Don’t Have It

What’s Wrong with the Education System?

What Colleges Can Learn from Big Corporations about Latino Recruitment

Women in the Workplace: Writing a Great Resume Increases Your Opportunities

I Need a Job Now: Making Room for Serendipity
Scroll to top

Discrimination in the Workplace: Deliberate or unintended?
3405 min
Best Tips to Identify the Qualities of a Leader