My friend and personal editor, Susan Landon (by now, my not-so-secret weapon), has had the biggest belly laughs and hair pulling episodes while editing my blogs, columns, books and anything else I throw her way. And, as I believe in the literary adage “show, don’t tell,” here is one of our latest exchanges to help you fully appreciate my grammatical handicap.

I sent Susan a new Op-Ed, which I had originally entitled: “Black Woman on the Golf Course.” (Admittedly, I had previously checked via phone with her that it was “on the golf course.”) My subject line, however, read: “Black woman in the golf course.”

Me – Sorry, wrong subject line but the title is correct. Did you notice I used your favorite word “eschew”?

Susan – Yes, I noticed “eschew” and I wondered where on (not IN) earth that came from!! You are really stretching your wings. 🙂

Me – You are such a great influence in me!

I can’t catch a break.

In my defense, (and the defense of many second language learners!) there’s little rhyme or reason for the grammatical rules of these two little devils. You wait in line at the store but you’re online on the Internet. Someone is on your side but in your mind. They are on your team but in your heart. Something is on TV, on the radio and on a website, but it’s in a book. It’s on a continent but in a country; in Manhattan but on Long Island. Come on! (Or should I go with “Come in, take a seat. Experience life as a second language learner!”)

Over the years, I have repeatedly studied the many rules that regulate prepositions trying to discover the patterns that elude me to no avail. So, I decided to settle for the second best thing besides speaking prepositionally-perfect English: Knowing that being a frequent user of both Spanish and English delays the onset of Alzheimer’s disease, makes me better at multitasking, and allows me to be keenly aware of what’s important and what’s not at every moment.

In a recent interview with the New York Times, Ellen Bialystok, a cognitive neuroscientist who has spent 40 years learning about how bilingualism sharpens the mind, says that, according to her research, 5 and 6 year-olds who are bilingual “manifest a cognitive system with the ability to attend to important information and ignore the less important.” How does that work? Dr. Bialystok explains:

“There’s a system in your brain, the executive control system. It’s a general manager. Its job is to keep you focused on what’s relevant, while ignoring distractions. It’s what makes it possible for you to hold two different things in your mind at one time and switch between them. If you have two languages and you use them regularly, the way the brain’s networks work is that every time you speak, both languages pop up and the executive control system has to sort through everything and attend to what’s relevant in the moment. Therefore the bilinguals use that system more, and it’s that regular use that makes that system more efficient.”

After reading this interview a few months ago, I felt a little bit better about my failures and began to plot a strategy. I was thinking of just mumbling something that sounds in-between on/in something like… “en” (which is the preposition we use in Spanish for both “in and on”) so nobody can tell which preposition I’m using. I was getting ready to start using my new solution when Susan called me out on doing something similar with two other pairs of words.

Susan – “Do you know the difference between ‘run’ and ‘ran’ and between ‘hang out’ and ‘hung out’? Because you always seem to mumble them and I always wonder which one you meant. I’m starting to think that you just don’t know which one is which.”

Me – “I just go with the same pronunciation for both because I can’t hear the difference between the present and the past tense and I can’t be bothered.”

Susan – “Well, that’s like me saying ‘ella fui a su casa’ instead of ‘ella fue a su casa’ and telling you I can’t be bothered,” she said using as an example the wrong conjugation of the verb “to go” in Spanish. Now that got my attention.

So, I’ve decided to practice my pronunciation of present and past tense for these two verbs because I believe the tense of the verb is often critical to understanding the meaning of what you’re saying.

But when it comes to on/in, I’ll let that slide in support of Dr. Bialystok’s research. It’s now obvious to me that my bilingual brain doesn’t identify those two as relevant information.

This article was first published in the Huffington Post.

Women in the Workplace: Writing a Great Resume Increases Your Opportunities 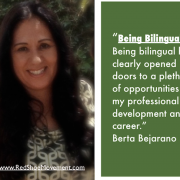 Benefits of being bilingual: Berta Bejarano

What is a CV? Wonder no more! 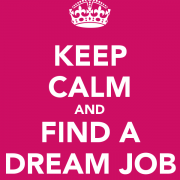 The Office Party: Do’s and Don’ts

Tips for Surviving an Overbearing Supervisor
Scroll to top

The Office Party: Do’s and Don’ts
3404 min
Tips for Surviving an Overbearing Supervisor