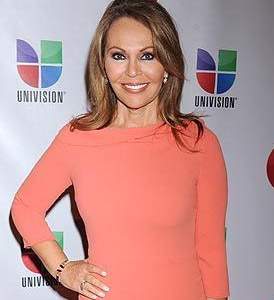 It never fails: When women receive any sort of public recognition, we almost always dedicate it to our moms or to the woman who raised us, often, our abuelas. This profound tie with our mothers is the first aspect of ourselves that becomes apparent when we reach any milestone or receive an award that makes us proud.

And as expected, this is exactly what happened at a gala organized by New York Moves magazine that took place at the upscale Setai Fifth Avenue Hotel; the magazine awarded more than 20 powerful women, among them–and as the only Latina–María Elena Salinas, the famed Noticiero Univision anchor.

One after the other, the recently honored women spoke about their mothers. Shaifali Puri, Executive Director of organization Scientists without Borders, said: “The seed of every powerful woman is an empowered girl. I was lucky to grow up with a mom who not only came to this country, and established a medical practice in a language that was not her native tongue, but showed me every single day that when I stood in front of my mirror (as a little girl) and I practiced my speech as the President of the U.S. or the anchor of 60 Minutes, that I wasn’t pretending that I was practicing.”

Our own María Elena Salinas recognized that her mom–a seamstress with only a sixth grade education, who was nevertheless able to raise three strong and independent women–was her role model. “She worked long hours and yet my sisters and I never felt there was anything missing in our lives. So growing up I thought being a working woman was very easy, a piece of cake. When it came my turn to do that I realized it was the biggest challenge anyone can face.”

Not all of us have the chance to be honored during a glamorous event surrounded by celebs and powerful women, but we can all equally have a deeply moving moment if we thank our moms in private for everything they’ve done for us and in doing so, becoming role models for our daughters (and sons).

The end of the year gives us the opportunity every 12 months to evaluate our lives up to that point and start anew. Why not finish off this year thanking your mamá (or thanking her memory if she’s passed away) everything that she’s done for you during your life, even if you’re not standing on a stage? It’s a tradition that should replace those oftentimes silly resolutions that we impose on ourselves every year.

And just in case my own mom is reading this, I’ll start: Thank you, Mami, for all the sacrifices you made during your life only to see me happy and for always supporting all my decisions…even those that you didn’t agree with.

This article was originally published on Mamas Latinas.

Don’t let jealous people stand in the way of your professional success!

The super easy strategy that will expand your network of contacts

Is it ever okay to lie in order to advance your career goals?

Know your brand: Lessons from a 92-year-old fashionista

Record Hispanic Enrollment in 4-year Colleges — Why?
Scroll to top