Most of the people I know have a horror story about a Gen Y employee or child which often ends with a comment along the lines of: They have a strong sense of entitlement; They don’t care about details; or They want to begin their careers as managers even though they have no experience.

And although historically, each generation has complained about the one following, Millennials (also known as Generation Y) seem to be particularly ill-fitted for the workplace they are encountering. An increasingly small world calls for an increased level of competitiveness, self-direction, and engagement, among other traits, and many Millennials don’t come equipped with these skills.

Being involved with a platform that serves young students, I’ve run into my share of young people who left me wondering how they will survive in the real world once they graduate. No motivation, no interest in developing critical relationships, no passion to speak of… It worries me that the high unemployment rate of this generation is not only due to market forces but also to this Millennial lack of desire and ambition. It’s a reality experienced not only in the U.S. but also in Latin America and Europe—where there are growing numbers of so called Los Ninis.  (Ninis stands for: Ni estudian ni trabajan, they neither study nor work.)

That’s why, on a recent trip to Chicago, it was so inspiring to spend time with the RMHC/HACER national scholarship recipients. This group of 15 students was brought together by McDonald’s for training and to celebrate the graduation of the first four award winners who are graduating college this year. I presented a college-to-workforce program for juniors and seniors; and I got to hang out for a couple of days with a handful of bright, highly motivated first-generation college students.

These students, each of whom won the $100,000 RHMC/HACER scholarship (several of them have also received the Gates Millennium Scholars award), are attending the best schools in the country. They’re enrolled at Yale, Harvard, MIT, UPenn, Duke, Brown, Arizona State University, University of California Davis, Ramapo College, College of St. Vincent and others of equal caliber.

They are taking advantage of every opportunity to expand their horizons by studying abroad in China, doing internships in Italy, volunteering with a Suicide Hotline in Providence, job-shadowing dentists in Argentina, you name it. They are part of the same generation that has many of us worried, but they are eager to change the world. They have ventured away from home to attend schools where they don’t feel 100 percent comfortable, but they are willing to push through. They are mentoring their siblings and serving as role models. They talk to the press and share their stories, and in doing so they help change the narrative that permeates the media about Hispanic educational underachievement.

Unlike many of their counterparts who seem to be lost in a false sense of entitlement and unable to figure out what to do with their lives, these young Latino Millennials are an important part of the same generation, the part that makes us proud. And we should all get behind them.

This article was originally published on Mamiverse. 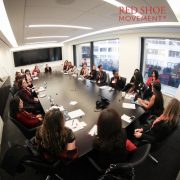 4 Insights on How to Take a Seat at the Table

How to Have a Successful Phone Interview

Prepare Your Kids for Back to School After the Holidays

Relocating Could Help Your Career
Scroll to top